Norwegians are amazing. I know, it’s a generalisation, but I’m impressed by their care for the environment, their farming practices, their roadworks and tunnels, their efficiency – doing things thoroughly – and their general nice-ness. They are also tough to survive in the harsh winters. I know that Norway is oil-rich, farming is subsidised, and that it is not a part of the EU, but even so…

Today, the generalisation was made even plainer by visiting two ship museums. First was the Viking Ship Museum which has two original Viking ships recovered from burial mounds.

This vessel had two women buried in it, so they were highly thought of to get such respect paid to them after death. The ship is too big to get in one photo.

It has taken huge amounts of patience, skill and knowledge to piece these ancient ships back together, and they are carefully monitored. 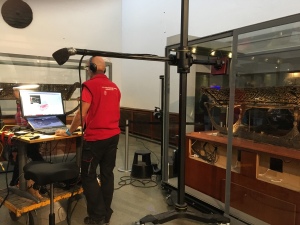 Then, at the Fram Museum, I stepped on board two real ships. The Fram was built to withstand polar ice and fitted out to the last detail by Amundsen. We know him as that Norwegian who pipped Scott at the post. This exhibition shows why. The expedition on the Fram was meticulously equipped, not only to withstand polar ice, but to ensure both the physical and psychological well-being of the people on board. The Norwegians had close knowledge of survival in snow and ice, knew dog-sledding and Nordic skiing and used survival techniques learned from the Inuit. 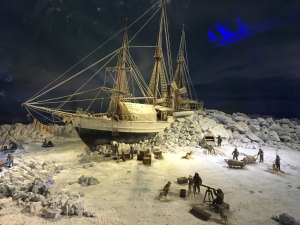 The photo above is a model, but these next ones are inside the actual ship (note the piano).

There are tidy compartments for everything. There was even a windmill to generate electricity.

These were two amazing museums to visit, particularly the Fram for its interactive exhibits.